The Guardian is a British daily newspaper. It was founded in 1821 as The Manchester Guardian, and changed its name in 1959. Along with its sister papers The Observer and The Guardian Weekly, the Guardian is part of the Guardian Media Group, owned by the Scott Trust. The trust was created in 1936 to “secure the financial and editorial independence of the Guardian in perpetuity and to safeguard the journalistic freedom and liberal values of the

A December 2018 report of a poll by the Publishers Audience Measurement Company (PAMCo) stated that the paper’s print edition was found to be the most trusted in the UK in the period from October 2017 to September 2018. It was also reported to be the most-read of the UK’s “quality newsbrands”, including digital editions; other “quality” brands included The Times, The Daily Telegraph, The Independent, and the i. While The Guardian‘s print circulation is in decline, the report indicated that news from The Guardian, including that reported online, reaches more than 23 million UK adults each month.[15]

Chief among the notable “scoops” obtained by the paper was the 2011 News International phone-hacking scandal—and in particular the hacking of the murdered English teenager Milly Dowler‘s phone.[16] The investigation led to the closure of the News of the World, the UK’s best-selling Sunday newspaper and one of the highest-circulation newspapers in history.[17] 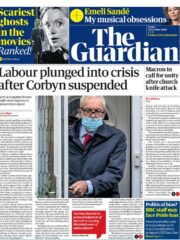