The Sun is a tabloid newspaper published in the United Kingdom and Republic of Ireland. As a broadsheet, it was founded in 1964 as a successor to the Daily Herald; it became a tabloid in 1969 after it was purchased by its current owners.[6] It is published by the News Group Newspapers division of News UK, itself a wholly owned subsidiary of Rupert Murdoch‘s News Corp.[7][8] Since The Sun on Sunday was launched in February 2012, the paper has been a seven-day operation. The Sun previously had the largest circulation of any daily newspaper in the United Kingdom,[7] but it was overtaken by rival Metro in March 2018.[9]

In January 2019, it had an average daily circulation of 1.4 million.[5] The Sun has been involved in many controversies in its history, including its coverage of the 1989 Hillsborough football stadium disaster. Regional editions of the newspaper for Scotland, Northern Ireland and the Republic of Ireland are published in Glasgow (The Scottish Sun), Belfast (The Sun) and Dublin (The Irish Sun) respectively. There is currently no separate Welsh edition of The Sun, readers in Wales get the same edition as readers in England 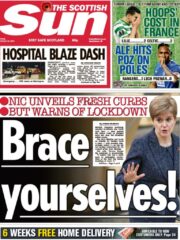